Buenos Aires: a week in the Argentine capital PART I

What can we say about Buenos Aires? The capital of Argentina is one of the most important cities in all of South America, it is much more than the largest city in the country. Buenos Aires is very different from the rest of Argentina and its inhabitants, the porteños are considered a different species within the Argentine world. It is true, much more for attractions in Buenos Aires, this city is enjoyed for its unique atmosphere. A city whose people never seem to sleep, where the locals are able to dance the tango in the milongas until the wee hours of the morning even on weekdays, and in general there is a lot to do in Buenos Aires at night.

Buenos Aires has many neighborhoods and each of them has its own identity, in this post, we will focus on the places to visit in Buenos Aires for free. You will see that the city and its surroundings are great and after a week you will leave feeling like you wanted to stay longer.

Day 1: Walk around the downtown area
As a first thing, we took a tour of the city center, which of course is something to do for free in Buenos Aires. We walked along the famous Avenida de 9 de Julio, which is the widest avenue in the world with a very large obelisk in the middle. Then we continued along with Avenida de Mayo which connects the National Congress with Plaza de Mayo. This street is full of very beautiful buildings and walking around here you always have to look upwards so as not to miss a single one. We walked along Florida Street, a pedestrian street that is always full of people, and then we finished the tour in Plaza de Mayo, visiting the Cathedral and contemplating the buildings of the Cabildo and the Casa Rosada.

In the afternoon we went for a walk in Puerto Madero, which is the most modern neighborhood and one of the attractions in Buenos Aires with skyscrapers on the river bank. Here you'll find the Puente de la Mujer (Calatrava's work), an old frigate, and many bars with a terrace for lunch or drinks (with western prices). Near the park, there is an ecological reserve which is a paradise for those looking for a place to do outdoor activities.

Day 2: San Telmo and visit to an Argentinean milonga
The second day is dedicated to the San Telmo neighborhood. A neighborhood that used to be inhabited by the rich of Buenos Aires, but then when the plague came, the rich went to the Recoleta neighborhood and now it is a rather humble neighborhood. Its main street, Defensa Street, is transformed into a market every Sunday; during the week you can only see the endless number of antique shops. We walked around the neighborhood to Lezama Park and then spent some time in the always lively Dorrego Square. There are always people dancing the tango for the customers of the restaurants who are sitting on the terraces. We also included a visit to the Manzana de Las Luces, the oldest block in Buenos Aires. During the guided tour, as we toured the buildings, we learned a lot about some stories of the city.

And what to do in Buenos Aires at night? The answer is easy: tango! We did not dance, but our friend Estela took us to a milonga (a typical place where locals go dancing the tango) where she usually goes dancing. This milonga is a very authentic place that is outside the center and where the locals usually go dancing. Foreigners also come here, but not those who go to see a show, but those who are dangerous and go dancing the tango. Estela explained to us that generally, foreigners want to dance with Argentines.

Day 3: Palermo and Recoleta
As Gábor was feeling a little sick with a cold and cough on this day, we left the house quite late to go directly to the Palermo neighborhood. Palermo is a very big neighborhood that has two parts, the part of Palermo Soho and Palermo Hollywood which are the most popular neighborhoods among young people, full of hostels, bars, terraces, a quite popular area to sleep in Buenos Aires.

The other part of Palermo is an area full of parks and gardens. Most of the parks and gardens in Buenos Aires are places to visit for free, only some are paid for. Here we took a walk through the botanical garden and then we wanted to go and visit the Rosedal (a park full of roses), but when we arrived they were already closing at 5 pm... Closing a park at 5 pm because the summer season over seems very ridiculous when the sunset is still around 7 pm, but well we saw that here too some try to work as little as possible. 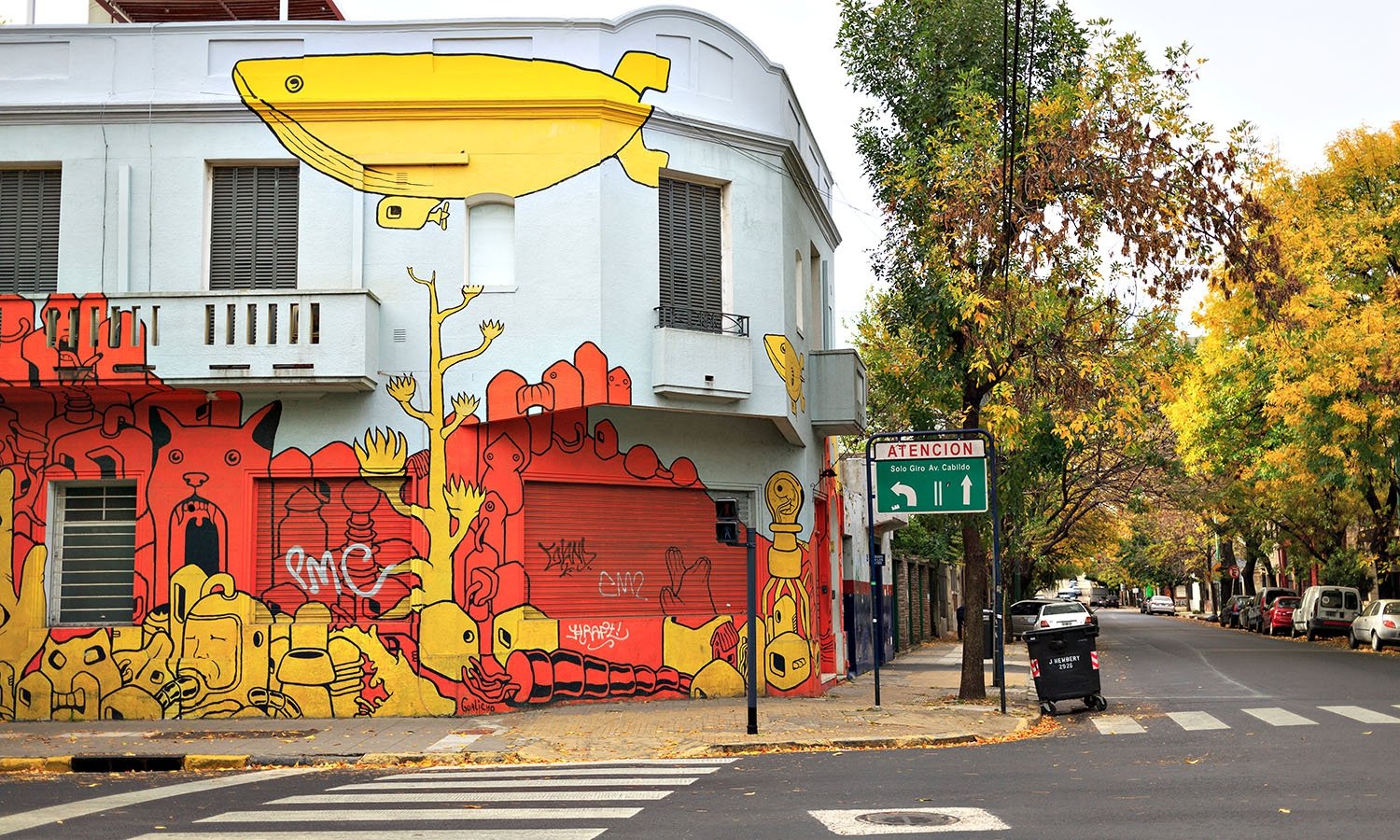 From the parking area, we walked to Recoleta, one of the most expensive and posh neighborhoods in the city. Here are all the embassies and new buildings. We arrived at the United Nations Park, perhaps the most spectacular park to be seen in Buenos Aires. In the park is one of the attractions of Buenos Aires, a large sculpture of a flower symbolizing the unity of nations, right next to the imposing building of the Faculty of Law. Crossing a bridge we reached the famous Recoleta Cemetery, but this was not our day because the cemetery was also closed.

Day 4: Recoleta Cemetery and other parks in Palermo
Like the day before we had several things to do in these two neighborhoods, we returned to Recoleta in the afternoon. It was a bit of an eventful day, apart from the fact that Gábor was still pretty rough, Estela accidentally closed us in her flat in the morning and had to let us out again:), there was a strike in the metro (the underground as they call it around here) and we had to take a bus that took an hour to get there. In general, the public transport in Buenos Aires is not very practical, there are still some underground lines to be connected (on top of that the service ends at 11 pm and the end even earlier), the buses called colectivos go very slowly through the traffic and almost nowhere they have priority and they work only with coins which is very little "tourist-friendly". 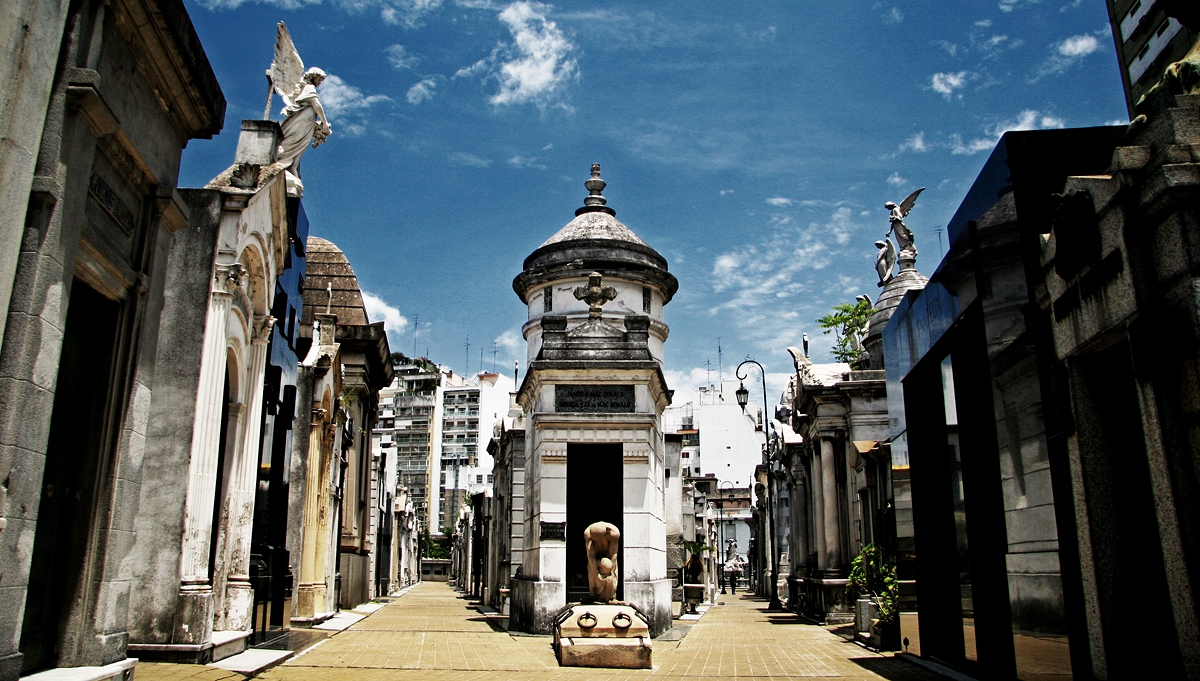 We visited the Recoleta cemetery, undoubtedly this historical monument is one of the places to visit in Buenos Aires for free. It is really beautiful and we visited it with a personal guide who gave us a tour explaining interesting stories about the cemetery. Of course, where most people meet, it is always at Eva Perón's grave, although her mausoleum is quite modest compared to many others. The cemetery reminded us a little of the Poble Nou cemetery in Barcelona.

After the cemetery, we walked to Palermo, where we spent an hour in the Jardín Japonés, a beautiful garden with oriental motifs, but nothing special.
Written by: REPOST
PUBLISHED: Nov 3rd 2020 | UPDATED: Nov 10th 2020